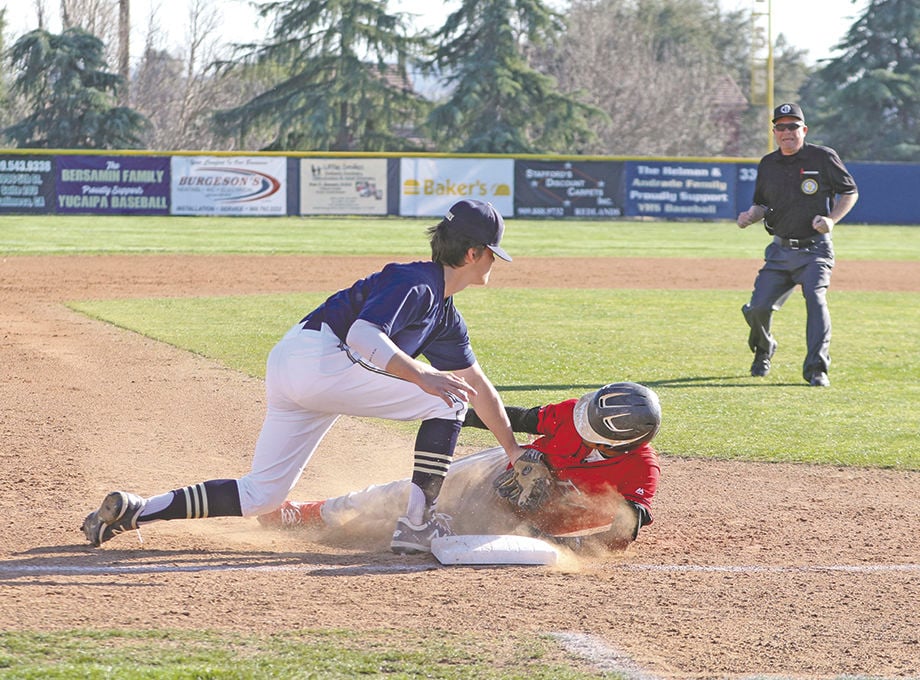 Jacob Reimer tags out a REV player at third. 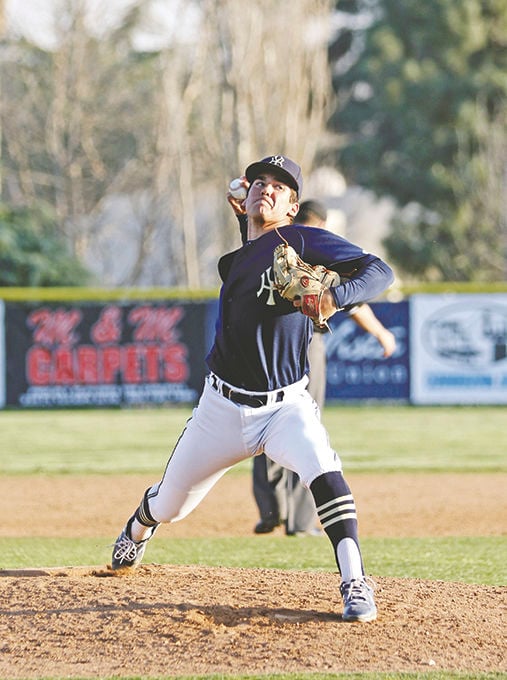 Wyatt Doty will play a big part in Yucaipa's 2021 season.

Jacob Reimer tags out a REV player at third.

Wyatt Doty will play a big part in Yucaipa's 2021 season.

“This was supposed to be a rebuilding year,” said the well-traveled coach, now 49, “but I put together a tough schedule on purpose.”

There were narrow losses -- 3-2 against 10th-ranked Palm Desert; a 3-2, nine-inning loss to ninth-ranked Corona; plus splitting a non-league doubleheader against visiting 11th-ranked Santa Ana Foothill.

Throw in a 5-1 loss to defending CIF champion Capistrano Valley.

Grajeda wasn’t stacking his schedule with easy marks. The idea of all those tough games, said Grajeda, “was to get these young guys going.”

His 2020 unranked Thunderbirds’ roster, he said, “was loaded.”

Shortstop Jordan Andrade, who was hitting .385 at the time 2020 suffered an early stoppage to the COVID-19 pandemic, is signed for Nevada-Las Vegas.

Make that “was” the best shortstop in Southern California. The senior graduated this past spring.

Next year, said Grajeda, “there will be no loss of talent.”

USC commit Caiden Huber, a family member of current MLB slugger Matt Davidson, was batting .343 with a home run in his junior season.

Then there were a pair of sophomores -- pitcher-catcher Wyatt Doty (.333 hitting, 0.68 ERA) and infielder Jacob Reimer (.472, HR) -- who are ticketed to NCAA power Cal State Fullerton.

If that’s not a sign of a fully-loaded team, consider that Yucaipa racked up Citrus Belt League wins over Redlands East Valley and Redlands.

In a 2-1 win over REV behind Heacock and Doty, Huber and Reimer knocked in the runs.

Yucaipa’s 9-2 win over the Terriers included two hits and three RBIs from Ryan Grinnals, plus a run-scoring double from freshman Owen Egan.

“A playoff run?” Grajeda said, repeating the phrase in a query. “I’d say yes. It’s tough to say. You need a lot of pitching.”

Then there’s the concept on whether or not high school sports will even get back into active status anytime soon.

“I like the idea of playing in the spring,” said Grajeda, reflecting various possibilities that CIF-Southern Section officials might scramble the calendar for 2020-2021.

“I’ve heard talk that they might flip football (to the spring) and move baseball (to the fall).

“The third option is moving all sports to one season in the spring. That would kill the small schools … who have to share athletes. It would be a nightmare getting officials.”

“We were two innings from sweeping Foothill at our place,” he said, “and we had Corona beat, but we dropped a ball and lost in nine innings.”

That tough non-league schedule was necessary, Grejada must’ve figured, with Yucaipa still locked into the tough CIF Division I structure with little chance of dropping down into lower divisions.

As for next season, Grejada isn’t sweating. “The only pitcher we lost from this year’s team is Bradley Heacock.”