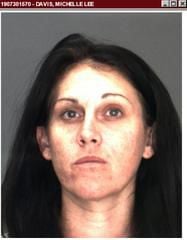 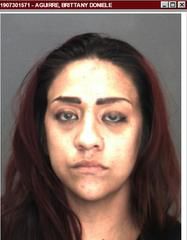 On July 13, at approximately 2:20 p.m., staff from Walgreens reported two shoplifters were in the store filling bags with merchandise in preparation to steal the items. The suspects had previously stolen from the business and were recognized by employees. Deputies initiated surveillance and contacted the females as they left the store with the stolen merchandise. Both were arrested and the stolen merchandise was recovered and returned to the store. Following their arrest, the females identified themselves as Jennifer Davis and Adrianna Aguirre and they were transported to the Central Detention Center for booking.

During the booking process, fingerprints revealed the suspects true identities as Michelle Davis, 34, of Beaumont and Brittany Aguirre, 27, of Banning. Aguirre was found to have five warrants for her arrest out of San Bernardino and Riverside counties on charges including forgery and narcotics related charges. Both were booked on multiple charges including retail theft and false personation.

While Davis identified herself as a Beaumont resident and Aguirre identified herself as a Banning resident, deputies are unsure if the information provided by the suspects was accurate. Although store employees suspect a getaway driver was in the area, deputies were also not able to link the suspects to any vehicle and the possible getaway driver is unknown. Deputies also believe these suspects may have been involved in other thefts in the area.

Anyone with information regarding this investigation, where the suspects live, or the identity of the third suspect is urged to contact Deputy Lozano at the Yucaipa Police Department. Callers wishing to remain anonymous are urged to call the We-tip Hotline at 1-800-78-CRIME (27463) or you may leave information on the We-Tip Hotline at www.wetip.com.