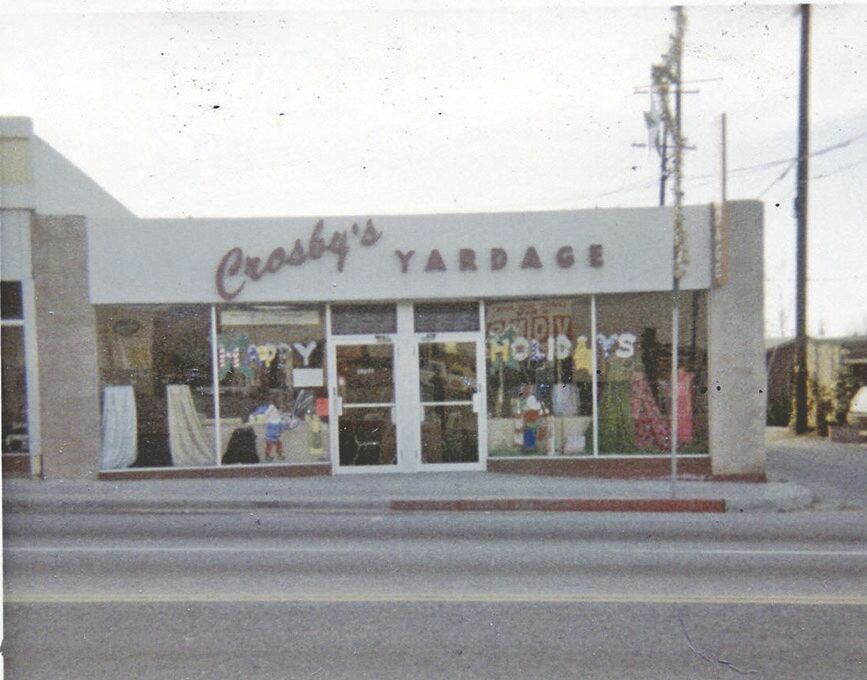 Crosby’s Yardage closed its doors in 1984. 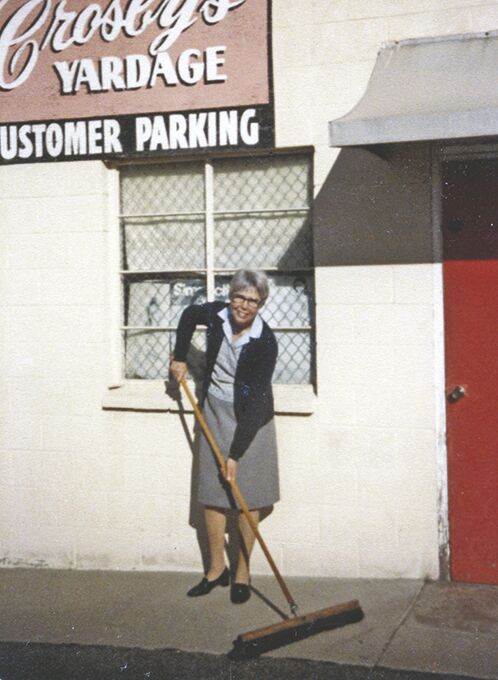 Lois Crosby, co-owner of the store, sweeps the outside of the shop in 1983.

Crosby’s Yardage closed its doors in 1984.

Lois Crosby, co-owner of the store, sweeps the outside of the shop in 1983.

There was a time in Yucaipa when stay-at-home moms spent summer days busily sewing back-to-school clothing for their kids, who traditionally returned to their classrooms in September shortly after Labor Day.

For this reason, the former Crosby’s Yardage at 35077 Yucaipa Blvd. offered a vital service in the community — namely providing all that was needed in the way of fabric, patterns and notions like zippers and buttons to sew families’ wardrobes.

“In the 1960s, back-to-school clothing was our biggest time of year,” said Lois Crosby, now 90, who was the store’s co-owner along with her late husband, Floyd. “Most moms sewed since very few worked outside their homes. Our pattern books were like wish books for the girls who came in with their mothers. It was lovely.”

The clothing pattern books were produced by Simplicity, McCall’s, Butterick and Vogue, and their patterns with complete instructions came in illustrated envelopes ranging in price, if you can imagine, from 50 cents to as much as $1.50.

“A big part of our business was also back-to-school shirts for the boys—just as popular as the girls’ dresses,” she said. “My children and my husband Floyd never had a shirt that was not homemade.”

Lois said their store carried “everything that had to do with sewing. In those days, they still had Home Economics classes, and teachers brought students for tours of our store. Girls could also come in and choose their fabrics and buy their patterns. Moms and daughters would come in to lay out what they would take home to sew. We had two big tables for customers to work.”

“Most mothers also made their daughters’ prom dresses, which we got special fabrics for,” she said. “We also had a lovely wedding department featuring silks, satins, laces and tulle. The Yucaipa High School cheerleaders came to us for their fabric for their cheerleading outfits every school year.”

Through their ownership of Crosby’s Yardage from January 1964 to January 1984, Lois and Floyd became acquainted with a multitude of families living in the valley. Their personal history in this area, however, goes back much further.

Lois, born and raised in Rye, Colo., came to Redlands with her family in 1938. After graduating from Redlands High School in 1948, she attended the University of Redlands, where she studied business and economics.

Her Redlands neighbor, Floyd Crosby, came from Houston, Texas. He had served in the U.S. Navy as a pharmacist’s mate on an octane tanker hauling gasoline for aircraft. Fortunately, he survived 12 crossings of the Coral Sea and actually watched from his ship deck when U.S. Army Gen. Douglas MacArthur walked back into the Philippines after his historic and prophetic pronouncement, “I shall return.”

Returning home from the war, Floyd took advantage of the GI Bill and earned his degree in agriculture from Cal Poly San Luis Obispo. He then took a job in Redlands in 1950 as a salesman for an ice cream and milk company, and that is when he met Lois, who lived across the street.

“We dated for one year, and we were married on the day I graduated from the University of Redlands, June 8, 1952,” Lois said. “When we first moved here in 1952, we thought Yucaipa was heaven on earth. The town’s population back then was 4,000, and it was a wonderful place to raise children.”

Floyd first went to work for Redlands Feed and Milling Co. at Yucaipa Boulevard and First Street. Then Lois and Floyd bought a business distributing eggs to grocery stores, including Food Fair in Yucaipa, cafes, restaurants and summer camps in the mountains. They later decided to buy what was then Brock’s Yardage in 1964.

“Floyd knew bookkeeping, and I had sewed my entire life,” Lois said. “I loved it, and so did Floyd. Our business was a real family affair. Our boys, Rusty and Tom, were janitors along with their dad, and our daughter, Gayle, ran the shop when she was in high school during summers if we were vacationing.”

But times changed, and Crosby’s Yardage changed to keep its doors open.

“Mothers went back to work, and girls quit wearing dresses, plus there were no longer Home Economic classes in school,” Lois said. “So we had to find new ways to keep going. Halloween became our biggest season, and we had Easter sales, too.”

Lois said they went into selling laces and trims and ginghams for quilting “big time. They also had a lot of business in making crafts, vests and neckties. Classes in Stretch & Sew and making lingerie were also popular with women customers. As important, local residents just enjoyed shopping and visiting with the Crosbys.

“Crosby’s was one special shop due to Lois and Floyd, who were always so pleasant and helpful,” Yucaipa resident Carolyn Traylor said. “And they always had top-of-the-line fabrics.”

“We had a personal philosophy that the shop was our home,” Lois said. “We welcomed everyone as though they were coming to visit us. It was our home for 20 years. But after 20 years it was time to do a little traveling because we had been open six days a week. Still, you never saw so many tears as when we closed up.”

So true, and 36 years after the shop’s closing, those who loved to sew still remember the warm, welcoming feeling they experienced when they walked into Crosby’s Yardage in uptown Yucaipa.

What are your plans for Labor Day?